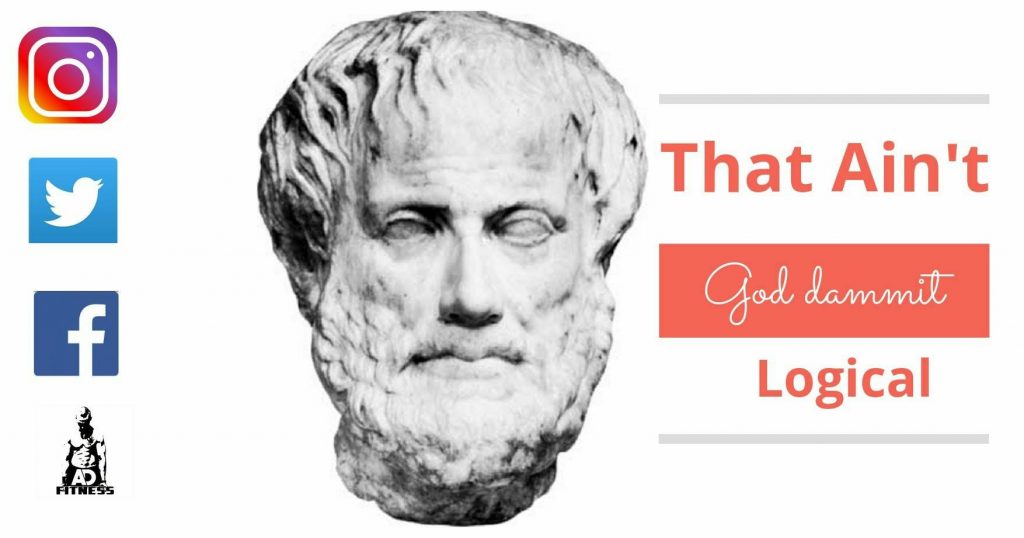 What is a logical fallacy and why should you care? If I could only give one piece of advice to help one sift through the sea of misinformation, and reason effectively it would be this… Educate yourself on Aristotle’s 256 syllogisms and learn to identify logical fallacies.

So a fallacy is a mistaken belief which is based on poor reasoning. The more fallacies we are aware of the less likely we are to commit them when deciding if we should believe a claim or not. The ubiquity of logical fallacies is quite startling and the recognition that one has committed them can be—to say the least— humbling. Now the problem is that until you have educated yourself in critical thinking these fallacies can be hard to spot. You have probably heard some of them so many times that you automatically accept them as sound reasoning. Humans interpret the world through inference and induction which, in laymen’s terms, means that our brains functions like pattern recognition software. Whilst this is extremely useful and usually leads us to the correct answer, it can also lead us to become confused about what is true — especially when the information is of an esoteric nature.

There are quite a few fallacies which are ubiquitous with in the fitness industry and recognising these can mean the difference in believing true information and false. However, these fallacies are not unique to the industry and instead can be found in everyday life! Here are my top five fallacies found within the industry and why you shouldn’t fall for them…

1. Post hoc ergo propter fallacy (after this therefore because of this) – this is the fallacious argument that because event Y followed event X, X therefore must have caused it. Here’s is an example…
“I was sick for two weeks then I took one table spoon of apple cider vinegar and the next day I was right as rain!”
If you can’t see the problem here let me explain. No link has been given which demonstrates that apple cider vinegar was the cause. It could well be that the cold had, in fact, run its course and would have subsided the next day regardless. We must show how we ruled out other possibilities before assuming a cause!

2. Argument from ignorance – this fallacy asserts that a proposition is true because it has not been proven to be false. The problem here is quite obvious especially if you know your way around the scientific method. If this were sound reasoning then by necessity all unfalsifiable claims would be automatically true, for example…
Unreasonable guy/gal: “Unicorns are real”
Me: “You can’t demonstrate that?”
Unreasonable guy/gal: “Well you can’t demonstrate that it’s false!”
Me: “Sigh!!!”

3. Appeal to nature fallacy – This fallacy states that because something is natural that it must, by necessity, be good/healthy. This, of course, is not the case and we know many naturally occurring things can be extremely bad for us and many artificial things can be very good for us. In fact the reason humanity has come so far ethically is largely down to controlling our natural tendencies toward instant gratification. A monogamous relationship, for example, is unnatural and actually obfuscates the propagation of our genepool, yet we know that it is much better for everyone that monogamy comes before desire.

4. Argument from authority – This fallacy states that because and authority in the field said something it must be true. The fitness industry has a propensity to commit this fallacy, I think most of us do. The problem here is that there is just simply not enough time to educate ourselves in every discipline so we tend to rely on authorities in any given field to provide us with correct information. The problem is that authorities can be wrong and they often are. So what we should do is make sure that our sources are good and anything that you are going to pass on to others should be fact checked or— at the very least— be given with the caveat that you may be wrong.

5. Argument from popularity – this fallacy states that a proposition is true because many people believe it. Everyone once believed the world was flat (some people still do). This is the easiest example to show that this form of reasoning is unsound. The fact that many people believe it tells us absolutely nothing about its truth!

By applying the foundational rules of critical thinking to everyday life one can begin to dispel falsities and attract the truth. This leads to a clearer view of reality, a stronger grip on the truth, an improved capability to grapple with misinformation and a fundamentally better thought process when approaching any issue!